the Piquancy of Romantic Selfdestruction Endures In the Future, Fancy Buttons will Festoon all Surfaces

Take Off and Landing When the Protagonist is Questioned with Vigour

Sherlock Holmes. Cocaine abuse and the disintegration of self-awareness and aggrandisement compounding on waves of dopamine and lingering serotonin. Watson is trying to keep his withdrawal at bay and panders to some of his flamboyant ranting.

Terminator. The machines take over and it is great, the capitalists are upset because while everything is more efficient and their uselessness is conspicuous. John Conner is an industrialist who wants a return to the old order of wage slavery. The machines mostly make sandwiches and calculate the expenditure of leisure time. All of humanity decided send a machine to kill Mr. Conner. Drama ensues.

So I got a £5 voucher for Debenhams and I was looking around, and one of the things I think I have told you in the past is that if I have spare money buy bedding. It's a good investment. So there i am looking at the duvet cover offerings. Also they have a sale on like a lot of places at the moment so it's like double bonus for Lee.

Now one of the other things about me is that I appreciate a good deer motif. So I'm there browsing and I see it! Exactly what I'm looking for a good quality double duvet cover and pillowcase set with a massive deer on the front. If I am being honest with myself he looks a little confused but I can live with that.

This is almost a sure fire buy for me, but I inspect some more. I take a look at the back to get a feel for the whole design and then I see it. The deer for some inexplicable reason is wearing a neckerchief of the American flag!

Long story short I walked away, not wanting to deal with the potential political undertones of buying such an item.

This will replace photography for representations of the world, storytelling and for the identification of specific individuals.

A book concerning learning web app creation arrived from Seattle yesterday and it had these portraits as a book mark, her name must be Ruby

Money Spools Away from Self

Three Errors of the Sound of my Voice in the UK

1. Ears fill with the sound of my voice and conclude I am from the United States, there are many more of these individuals than Canadians, so this error is minor and understandable.

2. The listeners mind fills with all of the crap they think they know about the people of the United States, as articulated by L. Theroux; they are fat, stupid, christians, constantly firing guns. The listener floats on a cushion of smug superiority, confidant in "determining accents" like Henry Higgins and making proclamations like Sherlock Homes.

3. I mention Canada, and the listener doesn't change trajectories, and assume their prejudice is correct and applies over the continent. Perhaps the crawl down is more painful then acknowledging ignorance or learning about the history of the nation they are standing in.

This crescendo of annoying happens daily, the shared history, political structures and Queen not penetrating the sweet fog of erroneous knowledge. Since I arrived in 2009, there has been an ongoing public discourse concerning "mass migration", the locals make themselves foreigners in their own country, by scarcity of effort. This desolate and decaying Flintstones theme park can be yours for just $2 million http://t.co/K7YeoxJ6go pic.twitter.com/OdmojOEEd5

How was Our Service Today?

Thank God for This Guy

and now for a song

Great! Now all I want is a fabric, velcro strap. Can someone please make one of those right away. Start with this one and use one of those clips things. Get on it! I am waiting. Thx! 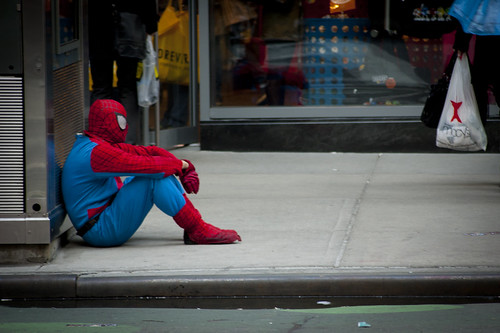 The current movie star and comic book hero, Spiderman is disappoints with his two retina based eyes, rather than eight compound eyes, for each corresponding hand. Yes, and hands, he is fifty percent form the expected number, famous for eight legs, this hero could use more appendages. These could add fun times to currently turgid plots.

When looking at a spider it appears that the silk comes from behind, not any of their legs, butt silk is what we want. Silk for spiders is used for creating apparatus for gaining food not transportation, this silk emerges from the equivalent of the spiders nipples and is an off shoot of the lactation process. Having a sticky white substance on his hands seems to indicate a completely different milk. I would settle for snack acquiring nipple silk, though butt silk would be better.

Getting bitten by a creature is never the cause for transformation. It is the process for the beginning of consumption or protection. A spider bite will inject a poison, and the poison is meant to kill. Transformational contact is always sexual. Peter Parker, got fucked by a spider.

Confusion about progeny can equal situations in which one thinks that creation happens from biting, we all are aware that it does not. Biting is used for eating, transformation of forms come from sexual encounters. Let's see them get it on.

His thorax and abdomen are not even segmented.

As Above, So Below